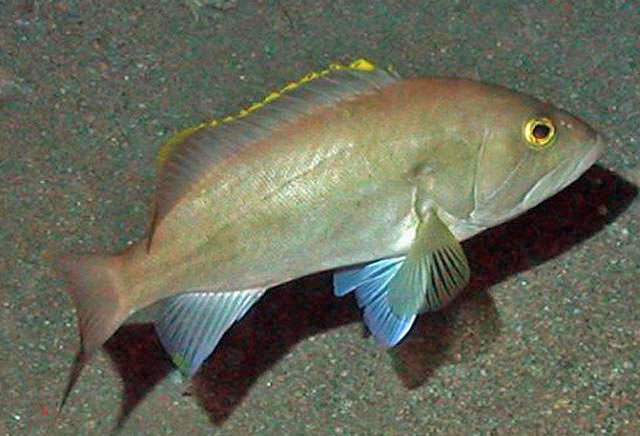 This species is found on reefs or within burrows in sand/mud bottom habitats from North Carolina to Brazil, including the Gulf of Mexico and parts of the Caribbean.

The spawning season for this species in the GOM is February to November with peak spawning occurring from March to September.

No detailed information exists on the spawning patterns or mating behavior of the Yellowedge Grouper. Based on anecdotal evidence from other areas and expert, scientific opinion, we concluded it likley forms a mix of transient and resident spawning aggregations along the edge of the continental shelf and the upper slope reefs in areas that overlap with their non-spawning habitats. Off North Carolina, females in spawning condition have been collected at depths of 160-194 meters, and larger adults have been collected at depths of 300 meters or greater. Adult yellowedge grouper prefer mostly soft substrate throughout the western and central Gulf of Mexico, where they have been observed to excavate and inhabit burrows, similar to those associated with tilefish, cut into cohesive mud-clay sediment in the western Gulf. However, adults are also common on sand, sand-shell, and rocky pinnacles as well as near sinkholes composed of hard bottom, cobble and rock outcroppings. Yellowedge Grouper are thought to be protogynous hermaphrodites. Adults are broadcast spawners with asynchronous development and external fertilization.

Commercial landings are slightly above average from March through June, which overlaps with peak spawning months. Although, Yellowedge Grouper have a protracted spawning season (February - November). Recreational landings vary throughout the year, but are greatest in January and February.