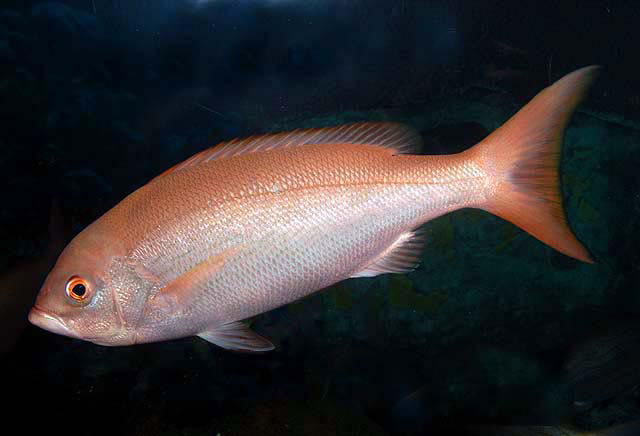 This species is found over hard bottoms and sandy habitats from North Carolina to Brazil, including the Gulf of Mexico and the Caribbean.

The spawning season for this species in the GOM is from April to September, with peak spawning occurring from June to August.

Vermilion Snapper is thought to spawn in a manner similar to Red Snapper, since the two species co-occur throughout the Gulf of Mexico, but its spawning behavior is poorly studied. Adults form schools of tens to a few thousand fish at coastal and offshore habitats (natural and artificial reefs, oil platforms, etc) throughout the year and spawn within these schools rather than concentrating spawning at a few, highly populated sites. Spawning is widely distributed over a large number of sites along the edge of the continental shelf or just inshored of the edge. Vermilion snapper in spawning condition are frequently caught at multi-species spawning areas that include Red Snapper, White Grunt, Black Sea Bass, Gray Triggerfish, and Scamp. Therefore, Vermilion Snapper may best be described as resident aggregation spawners as there is no evidence that coordinated migrations to specific spawning sites occurs. There is also no information to suggest that densities at spawning sites are significantly higher than non-spawning sites. Therefore, it is also reasonable to categorize this species as a simple migratory species rather than an aggregation spawner. There is no evidence of a lunar spawning cycle, as Vernilion Snapper in spawning condition are collected continuously throughout their spawning season during all moons. Vermilion Snapper are broadcast spawners with external fertilization.