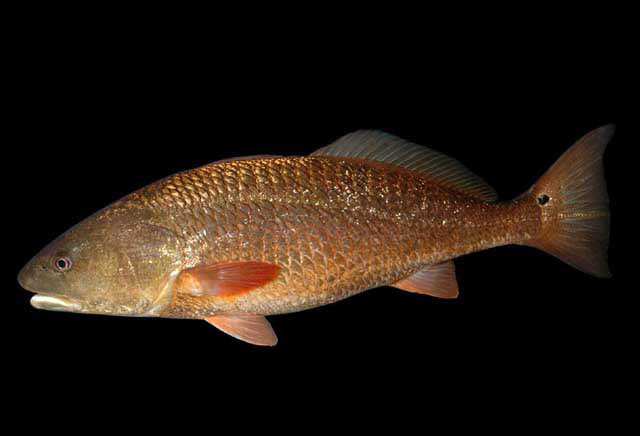 This species is found on seagrass beds, sandy bottom and muddy bottom habitats from Maine to the southern Gulf of Mexico.

The spawning season for this species varies among regions and reports. The most common spawning season in the GOM is from August through November with a peak during September and October.

Adult Red Drum form large pelagic schools along the coast of the Gulf of Mexico, and spawning occurs within large spawning aggregations of hundreds to tens of thousands of fish that form in coastal waters off the mouths of estuaries, tidal inlets, and channel passes that are highly predictable in time and space. The species is best described as a partial migratory spawner, as aggregations are comprised of a mix of transient and resident spawners. Courtship begins at or near sunset, with spawning occurring for 1 to 4 hours afterwards. Adults may migrate long distances to reach spawning sites and exhibit high site fidelity to specific aggregation sites, but they move disperse to other locations along the coast to forage or overwinter once spawning is completed. Observations from tank studies along with the large relative size of male testes (i.e. GSI) and schooling behavior of adults indicates that spawning typically occurs in single female, multiple male groups. Red Drum are broadcast spawners with external fertilization. Individual females can spawn every two to five days on average.

Recreational landings in state waters peak during the period of September and October, which coincides with the peak spawning season, and landings are consistently greater during spawning months than non-spawning months.