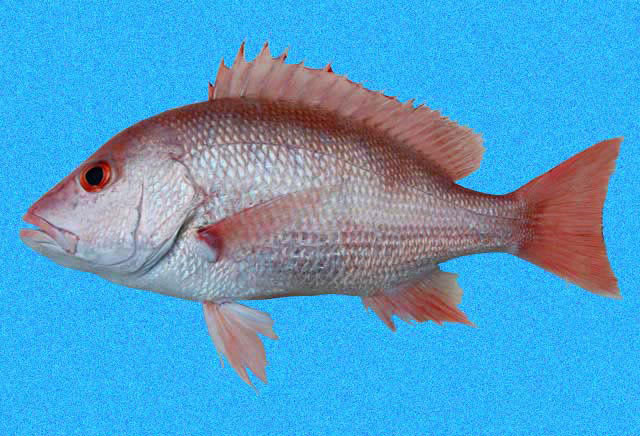 This species occurs in the western Atlantic from Massachusetts south to Brazil, including the Gulf of Mexico and parts of the Caribbean. Juveniles are common on sand and mud bottoms, whereas adults are common on natural and artificial reefs.

In the GOM, this species spawns from May to September with peak spawning occurring from June to August.

Red Snapper form schools of hundreds to a few thousand fish at coastal and offshore habitats (natural and artificial reefs, oil platforms, etc) throughout the year and spawn within these schools rather than concentrating spawning at a few, highly populated sites. Spawning is therefore widely distributed over a large number of sites and occurs over a wide depth range of 15-75 m. Therefore, Red Snapper may best be described as resident aggregation spawners as there is no evidence that coordinated migrations to specific spawning sites occurs. There is also no information to suggest that densities at spawning sites are significantly higher than non-spawning sites. Therefore, it is also reasonable to categorize this species as a simple migratory species rather than an aggregation spawner. Off the southeast coast of Florida, spawning activity peaks during the late morning to early afternoon hours, but some fish spawn throughout the day. In the northern Gulf of Mexico, spawning occurs over a five hour period beginning in the early afternoon (1330 h) and peaking near 1600 h. There is no evidence of a lunar spawning cycle. Individual females spawn every 3 to 6 days on average, and spawning frequency increases with age and length. Red Snapper are broadcast spawners with external fertilization.

Commercial landings peak in February and are the lowest during peak spawning months (June to August). Recreational landings are greatest in May and June, followed by July to August, which coincides with the spawning season.